For years, National Coming Out Day has been a celebration designed to honor the stories of LGBTQ+ people who were bold and brave enough to declare their truth. Recently, though, there’s been a growing chorus of activists within the community who challenge the premise of the occasion. Why are we forced to come out? they ask. Why must someone be “out” publicly to be proud?

Erica Bougard understands this sentiment all too easily. In fact, it’s been a full year since the heptathlete “came out” to the sports world—all because she wore a pair of shoes.

Bougard was no stranger to Pride celebrations or the LGBTQ+ community off the track. But once she copped a couple of BeTrue t-shirts, she realized she loved the idea of wearing the rainbow flag so much that she figured, why not rock it on her track apparel, too? In a moment of DIY inspiration, she cut the flag from her shirt and pasted it onto her high-jump spikes. “It was like a piece of me on the shoe,” she says.

Soon afterwards, Bougard wore the shoes to compete. But when she came down from her high-jump, it wasn’t her athletic skills that caught everyone’s attention. The shoes immediately prompted coverage from scores of press outlets, who remarked on the athlete’s “controversial” choice: Bougard rocked the Pride flag in Qatar, a country that criminalizes homosexuality. Suddenly (and unwittingly), she’d become something of a hero for LGBTQ+ athletes.

The incident was a turning point for Bougard, who says she felt liberated by the spectacle—now, it was clear to the entire world of sports that she was a gay athlete.

“I definitely felt like I was inviting others in. If you want to be a part of my life, then that should never bother you.”

Before Qatar, though, there was no pivotal “coming out” story for Bougard. While her close friends and family already knew she was queer, the athlete never felt the need to announce it professionally. “I definitely felt like I was inviting others in,” she says. “If you want to be a part of my life, then that should never bother you. I’m inviting you in—if you want to be in my world, this is what you have to do.”

The international spectacle in Qatar ended up showing Bougard the importance of owning her truth as a person with a platform. “You have a huge following as an athlete—more than most people would,” she realizes. “People have this passion, this love for sports that carries into the way we talk about the rest of our lives. I go on the track and I perform better while being myself.”

That’s why this summer, she was thrilled to participate as an out athlete in Nike’s BeTrue campaign. “It just fits me so perfectly,” she says. Even while in quarantine, she’s been excited to read the messages she gets from her LGBTQ+ fans, engaging with them about their own stories.

“My first time at Pride, I just felt this sense of relief. I realized, everybody here is just like me!” That’s why more people should be vocal. It makes people feel like it’s okay to be themselves.” 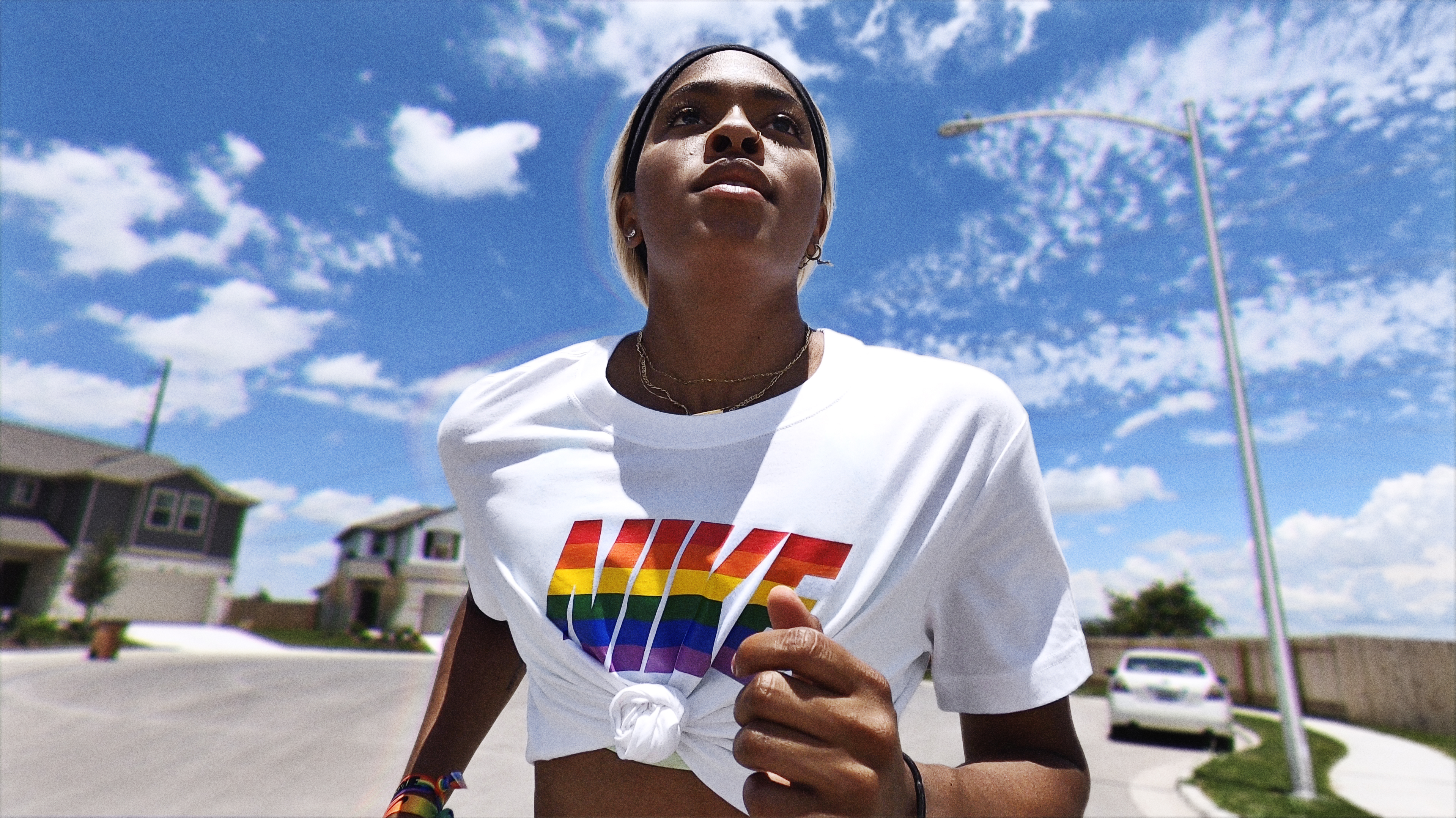 This new part of her professional journey has left her with a lasting lesson. “My first time at Pride, I just felt this sense of relief. I realized, everybody here is just like me!” she says. “That’s why more people should be vocal. It makes people feel like it’s okay to be themselves.”

Aside from adjusting to her newfound perspective, Bougard is most excited to get back to the track. She’s starting to get into the swing of things at a training center in California. “There are muscles I haven’t worked out in two, three months,” she says. “So some days, I can barely raise my arms!”

In the end, though, the payoff is entirely worth it. “The thing about running is, you feel free,” she says. “When I’m high-jumping, it’s my getaway. It’s a chance to let go.”

Phillip Picardi is an award-winning journalist and editor, best known for his role in invigorating Teen Vogue and editing Out Magazine. He’s now the host of the Crooked Media podcast Unholier Than Thou.

How We Stand Up for Equality

We believe in the power of sport to unite and inspire action. Together with our employees, athletes and partners around the world, we’re working to level the playing field for all.

Coinciding with the launch of the 2020 BeTrue collection, Nike proudly celebrates Pride month by supporting 20 organizations advancing the LGBTQIA+ community.