As part of Nike’s efforts to ensure that all communities feel included and represented in all spaces, in 2019 Nike designers imagined a series of bicycles for the BIKETOWN bike share program in Portland, Ore., and at Nike World Headquarters, in Beaverton, Ore. Each design represents a community that aligns with one of Nike’s eight employee resource groups, called NikeUNITED.

Over the past year, the signature bright orange bikes of the BIKETOWN program were reimagined with wraps, representing some of the communities that make up the fabric of the city.

Inspired by rainbow colorway Pride-themed bike wraps from 2017, the BIKETOWN Culture Collection rolled out throughout the year, beginning with a Black History Month bike and followed by six more bikes in unique editions.

As designer Jason Cochran said: “Looking at the releases as a whole, [the BIKETOWN Culture Collection bikes] really shows the inclusivity and equality message that we here at Nike stand for.”

Multifaceted, this bike design incorporates several influences, including kente and other traditional cloths, the synthetic and natural colors of Kemet [ancient Egypt], as well as Afro-Futurism.

“This project was a great reminder of how essential access and connection are between our communities. Hopefully initiatives like this drive more authentic ally-ship among us and further advocacy for more inclusion across the board.”

The arrows on this bike are symbolic of women uplifting other women to achieve success; the bold colors are meant to remind women to stand out from the crowd.

“I hope that the bike is inspiring women and their allies to speak up and support one another. And #BalanceForBetter.” 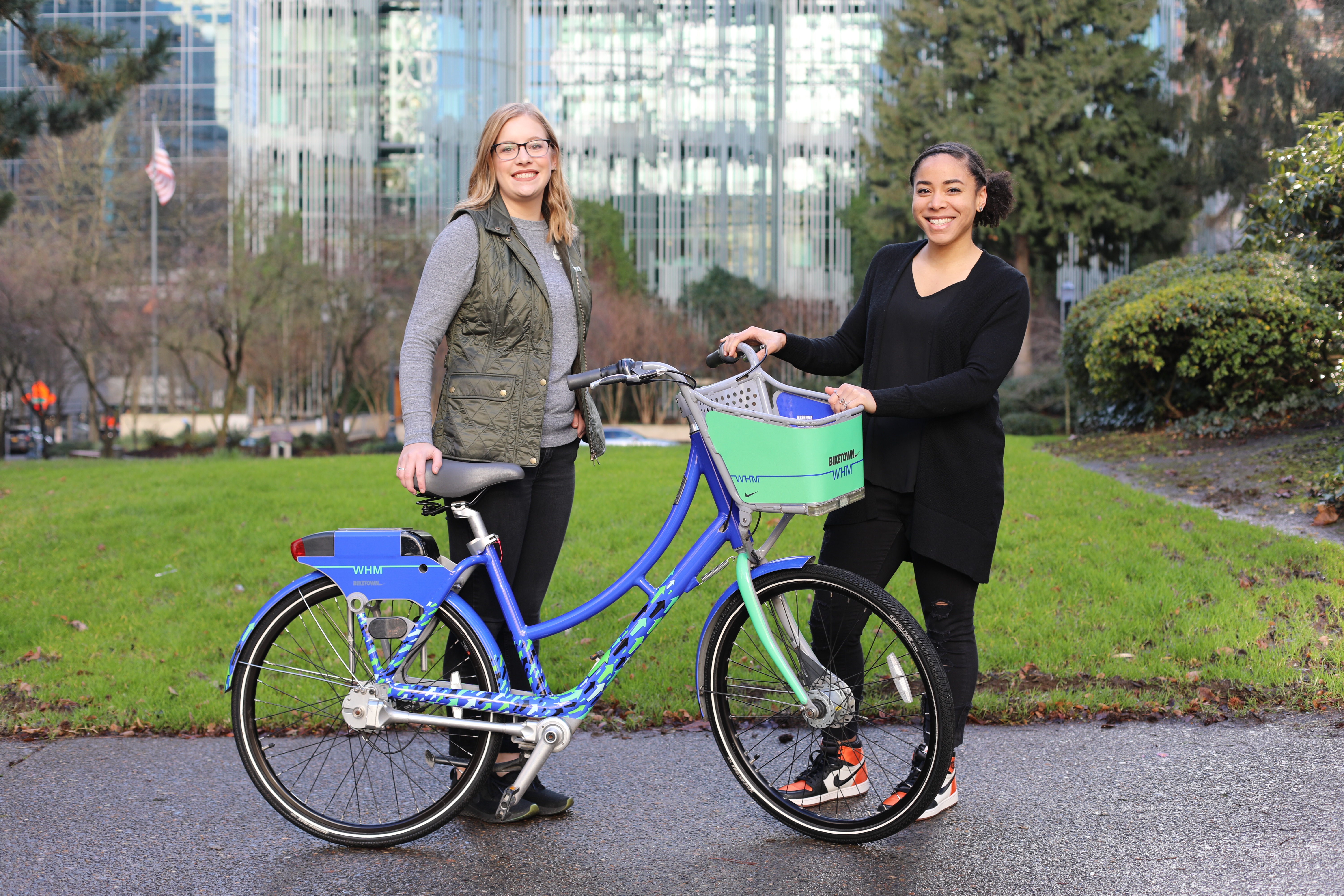 To make the bike inclusive of all five branches, the color palette is a call out to utility uniforms, which are all typically military green; design elements reference all branches, and the sixth star in orange represents Nike founders and U.S. Army veterans Phil Knight and Bill Bowerman.

“I really wanted people to know how diverse our nation’s military is. In fact, much more diverse than the private sector. This was a salute to the people who sacrifice and put their lives on the line to help defend us all.” 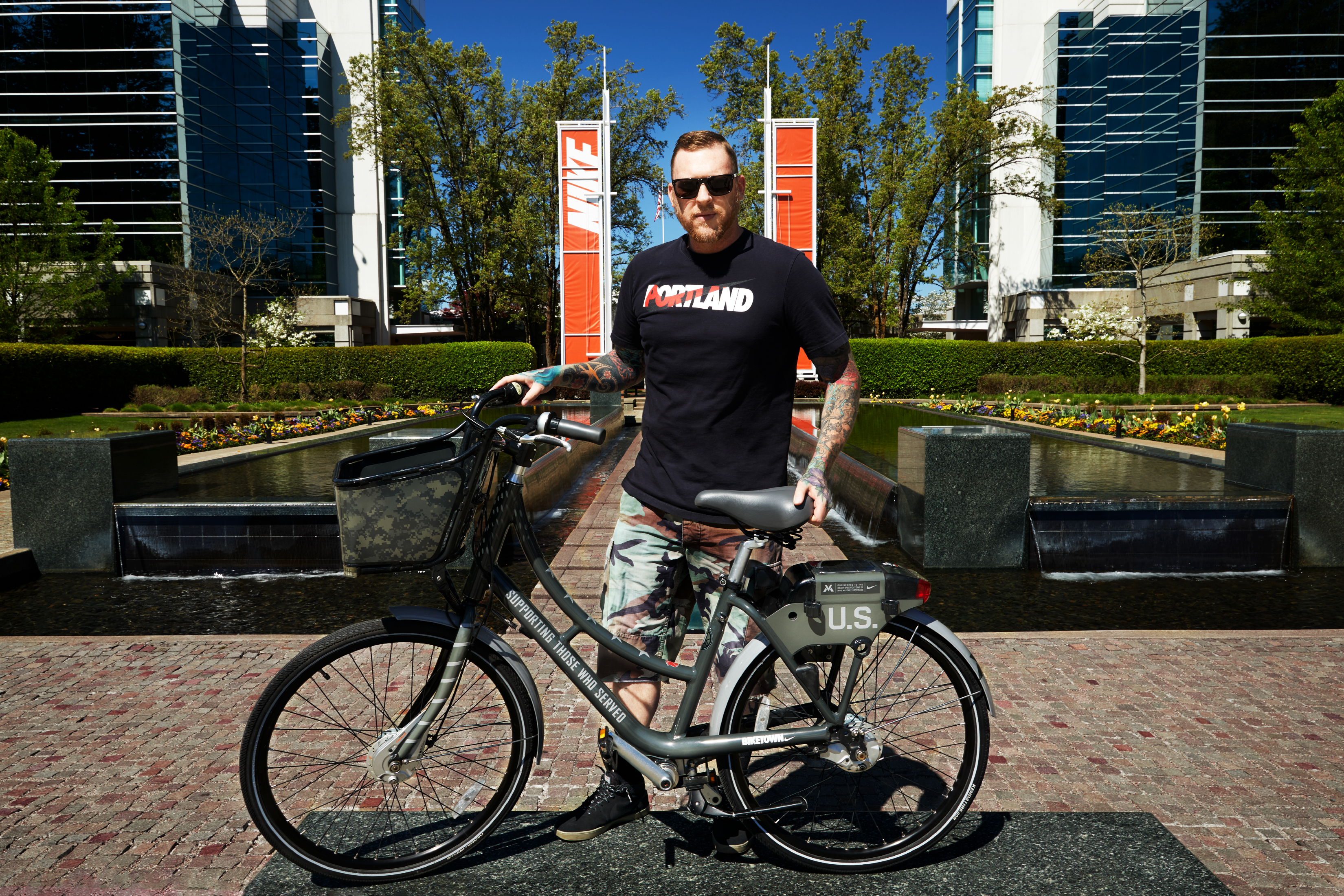 Bold, blue and oceanic-inspired, this bike is inspired by the theme of “Building Bridges,” put forth by the Ascend network, which focuses on providing support to employees representing Asia, the Pacific Islands and the Middle East.

“Now, more than ever, representation matters. Our bikes represent our journey together as human beings.” 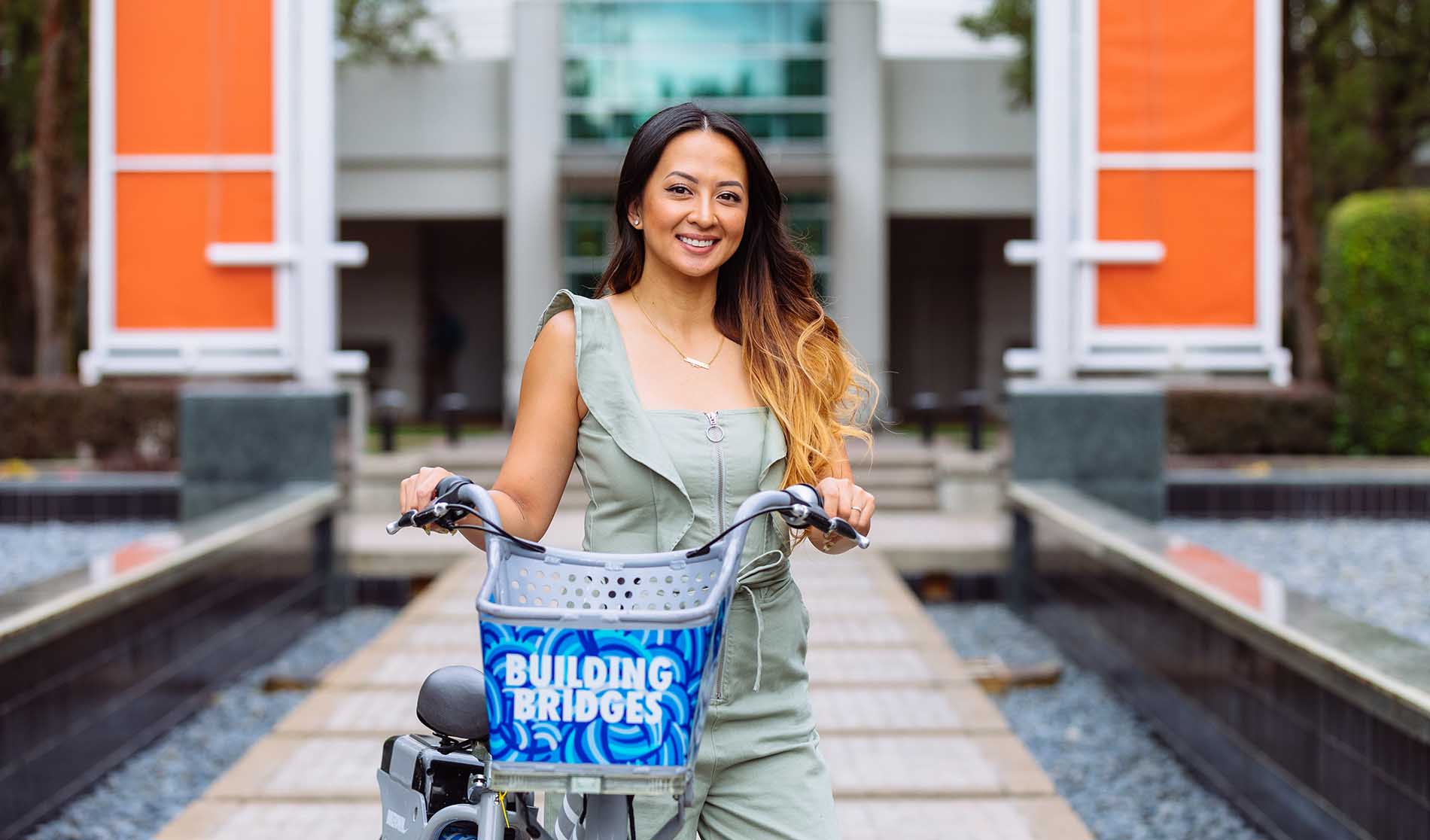 A mosaic representing the ribbon colors of a variety of causes, this bike reminds us that we are all on a spectrum of ability throughout our entire lives.

“Through kindness you can build community, and through community you can build kindness. So many amazing people have been brought together by this project, and I’m so grateful to have been a part of it.” 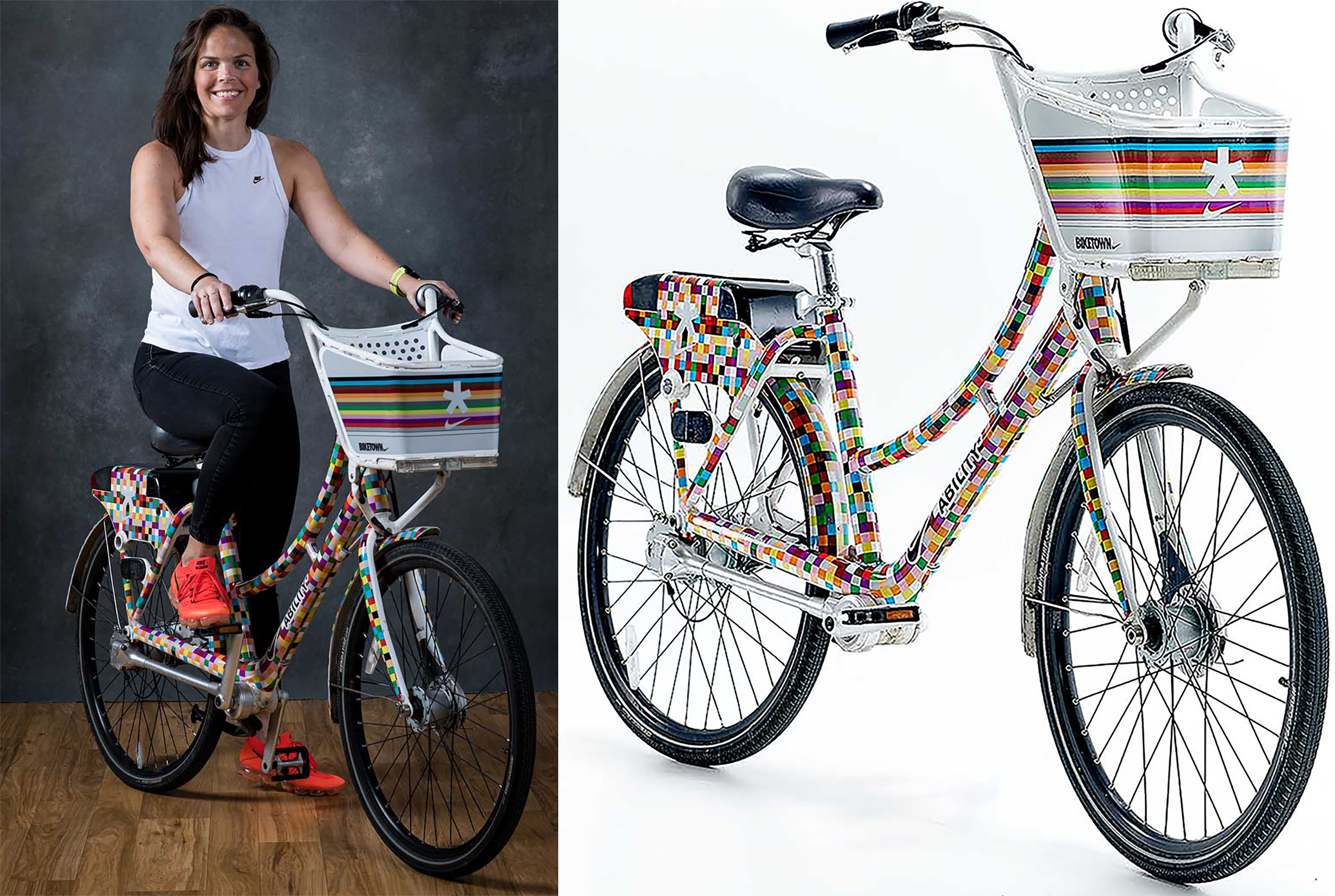 The feeling of movimiento, or movement, behind this design, is inspired in part by the diverse music and dance of Latino culture, and the sense of unity people feel when dancing in a shared space with others.

“BIKETOWN’s Culture Collection reminds us that together, we make a beautiful mosaic that inspires movement in our everyday lives. It is awesome to see the bikes around town, constantly parked in different locations, always on the move.” 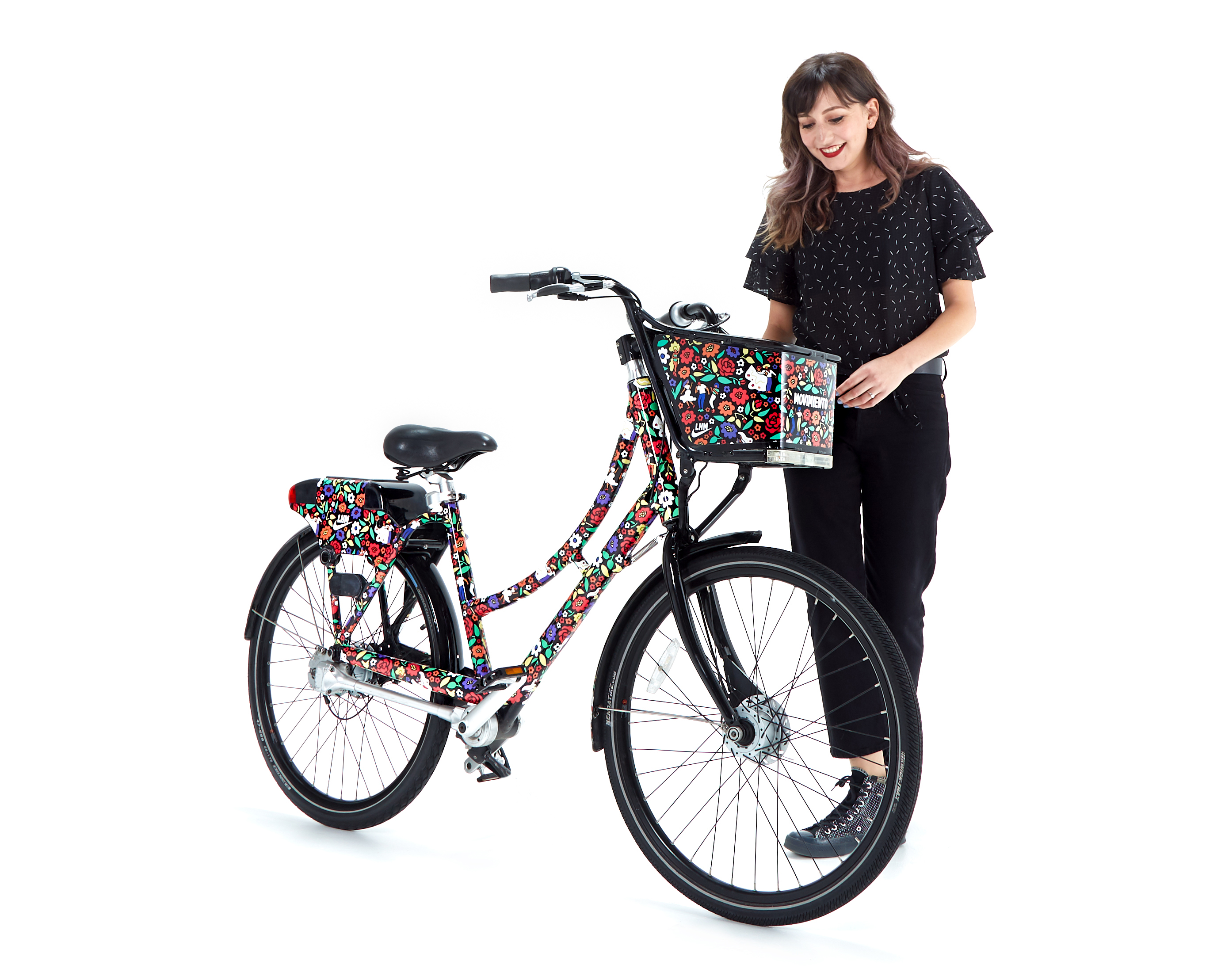 Quahog and whelk shells, used to make Wampum belts, inspired the purple hue of this bike; its design elements hold historical significance, including references to belts and treaties.

“The world is so small! Once the NAHM bike design was out, I had so many people around town share their connection to my people. Art is such a wonderful way to connect.” 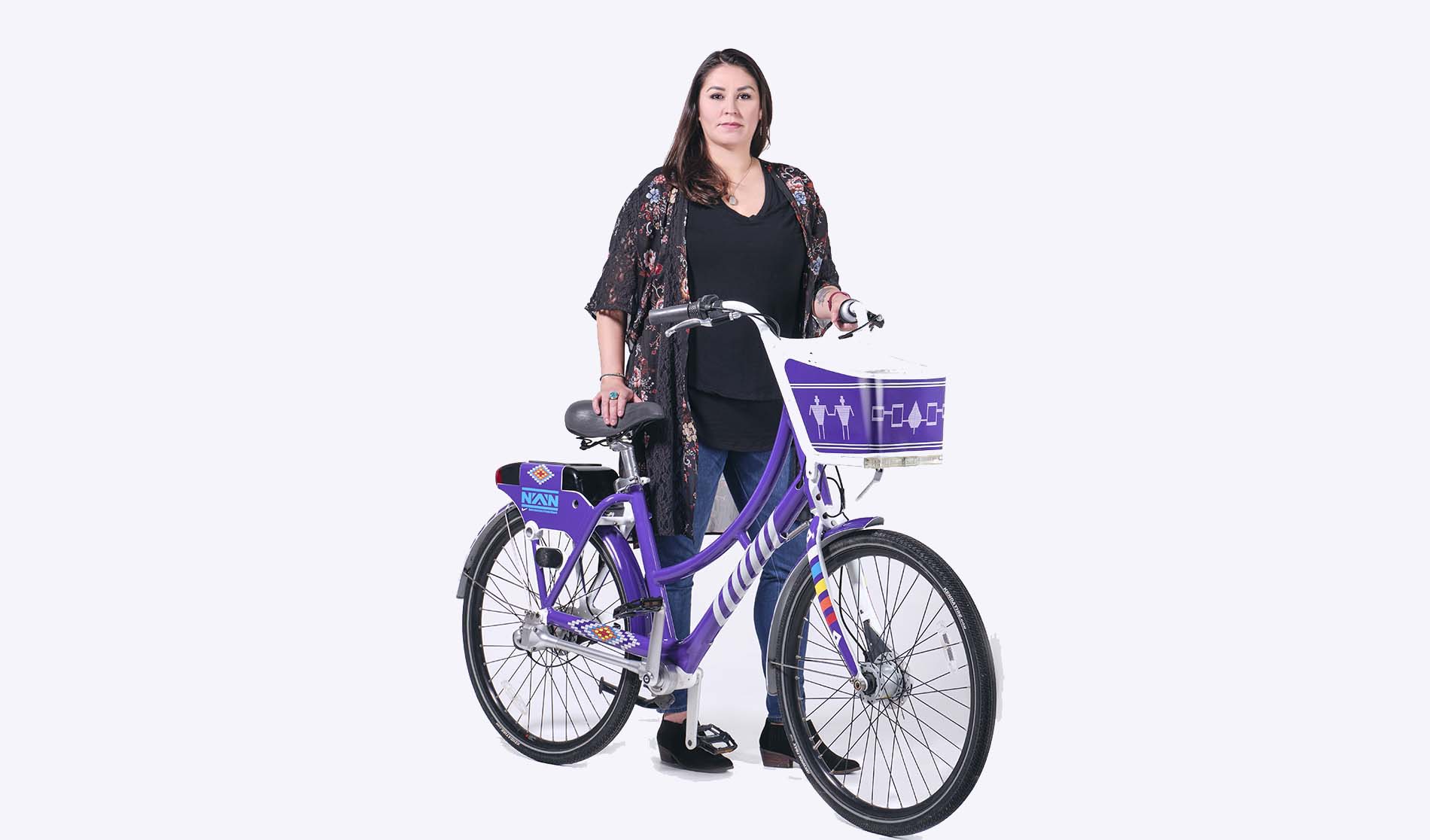 Launched in 2016, the BIKETOWN bike-share program is owned by the Portland Bureau of Transportation and is operated by Lyft, with Nike providing funding as a title and founding sponsor. Since its inception, local riders have taken more than 1 million trips on the rental bikes.

Learn more about the BIKETOWN bike share program here, as well as Nike’s ongoing commitment to equality and community inclusivity. 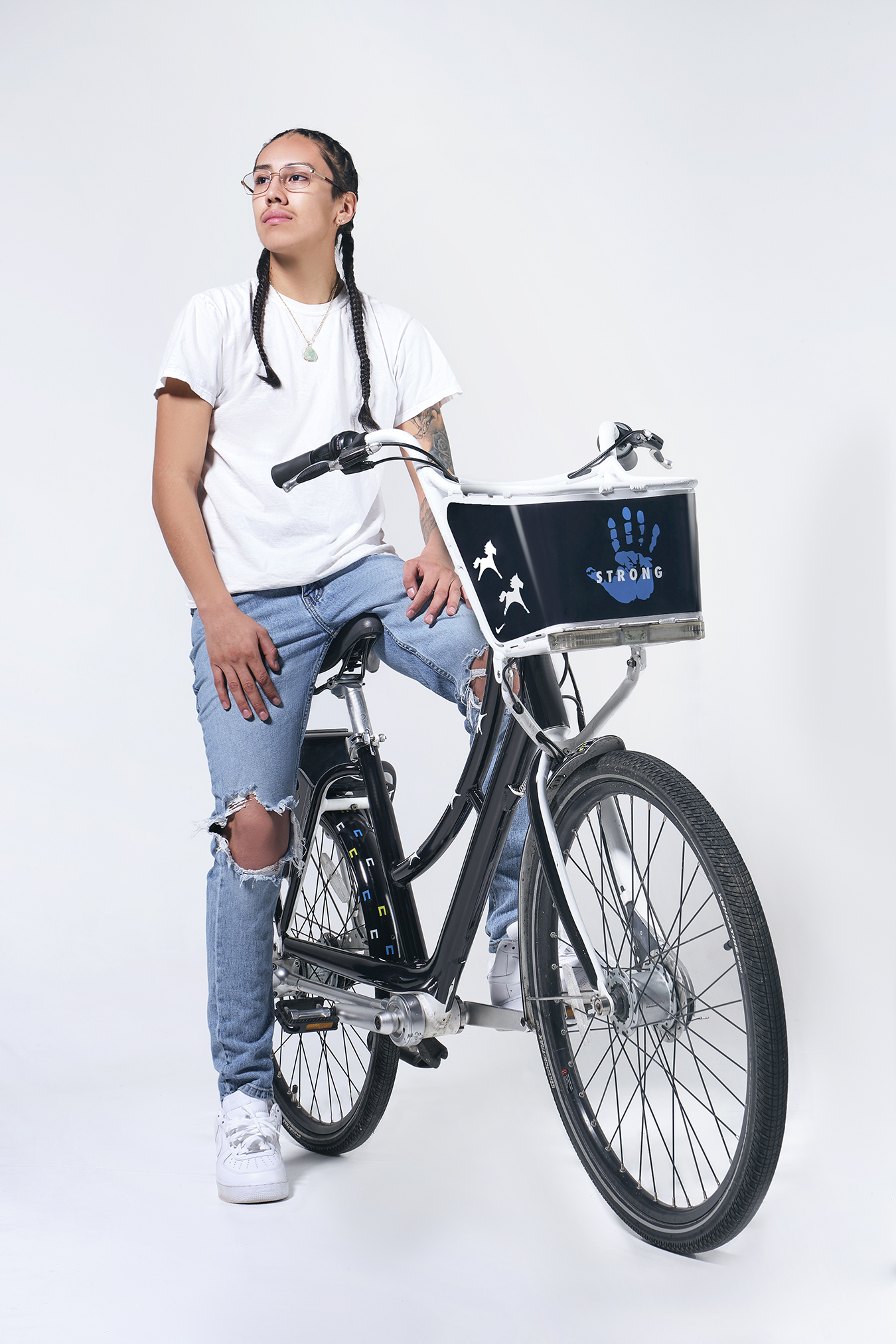 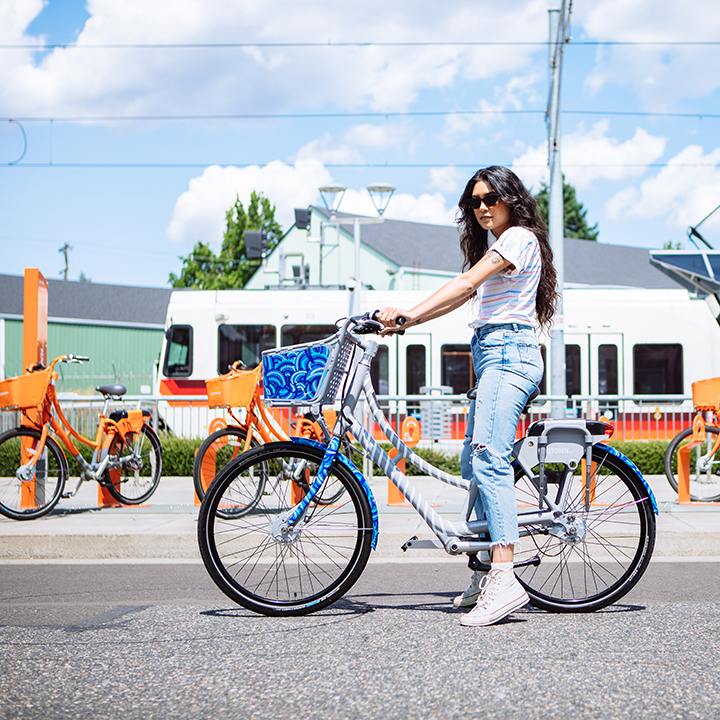 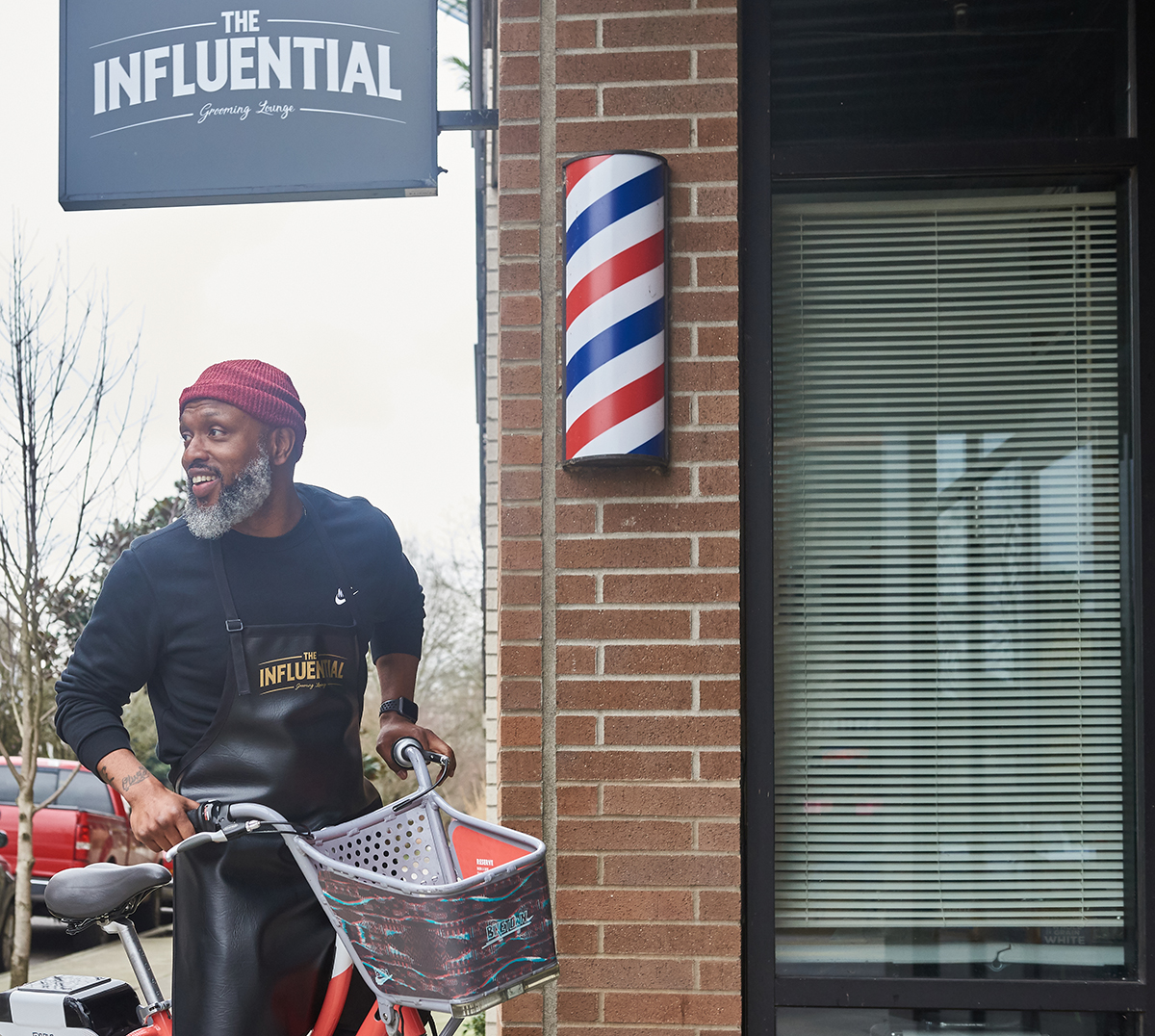 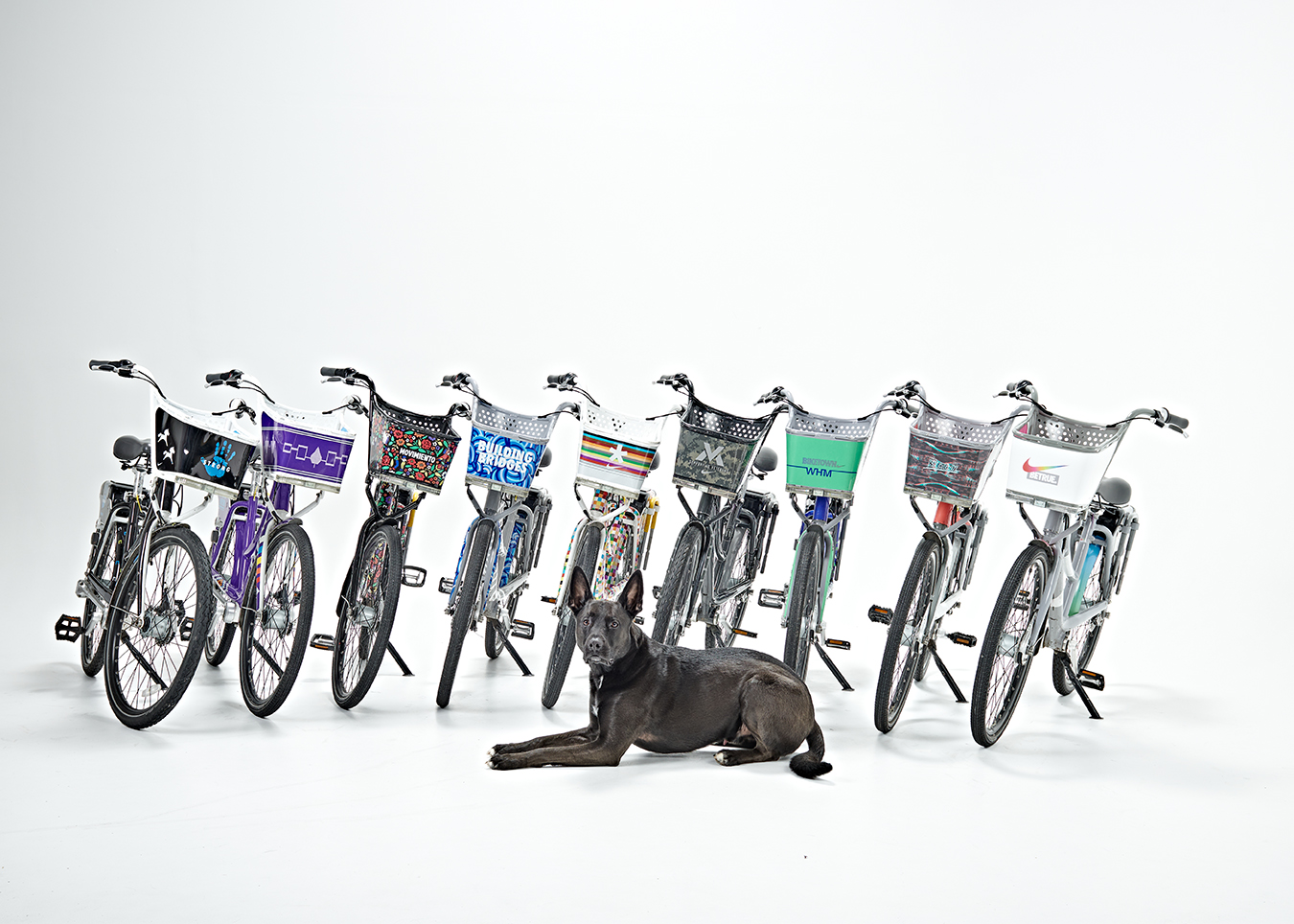 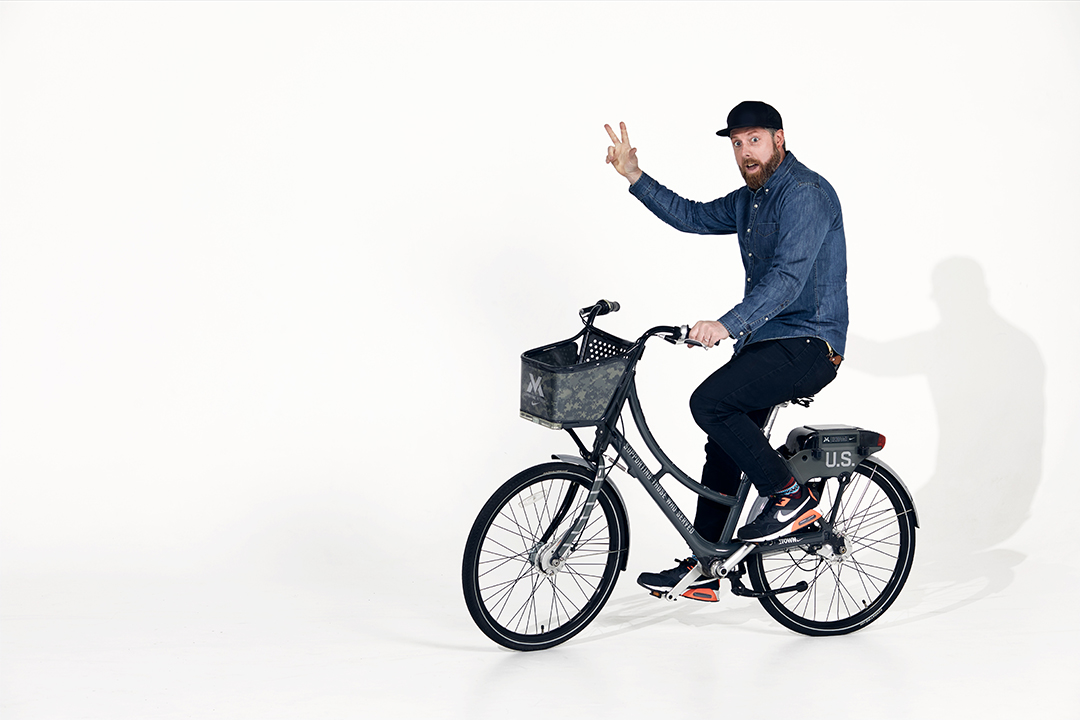 As a kid growing up in Detroit, Anthony Johnson was always looking for positive role models, and he found them in sports. Now, as assistant head coach at the Nike Detroit Community Store, he’s in a position to offer the same thing to kids just like him.

Nike’s collaboration with Steven Harrington on the Flyleather Earth Day Pack, made with at least 50% recycled leather fiber, aims to inspire love for the planet on Earth Day and every day.

Coinciding with the launch of the 2019 BETRUE collection, Nike proudly celebrated Pride month by supporting more than 20 organizations advancing the LGBTQIA+ community.